Lace up your boots and hit the cobblestones! The Collingwood Beer Trail is here to showcase all that this glorious ‘hood has to offer and celebrate the revival of Collingwood’s long lost brewing industry.

In the late 1800’s, Collingwood was the epicentre of Australian brewing with many breweries operating in the area. By the early 1900’s however, as a result of mergers, almagations and closures, all the breweries were gone.

More than a century later, Collingwood has once again become a mecca for indie craft breweries with the likes of Stomping Ground, Bodriggy, Fixation, Molly Rose and The Mill all opening within the past five years. We have now decided to join forces in a bid to support our community and highlight not only the local breweries, but the many galleries, cafes and venues in the flourishing area.

The free Collingwood Beer Trail map is available at all breweries, or by download, and you can explore the Trail in your own time during the breweries’ tap rooms trading hours. A ‘Trail Pass’ is also available for just $30 which includes delicious beer samples at all breweries and a Beer Trail tote bag once you visit all five!

CLICK ON A BREWERY TO PURCHASE A TRAIL PASS

$5 from every Ticket/Trail Pass sold will go to a rotating local charity. Check out our current local charity below.

Our current charity is The Inner North Community Foundation.

Launch Event
Step by step ‘how to get amongst’ guide:

BUY YOUR TICKET FOR THE LAUNCH EVENT BELOW

The new Collingwood Beer Trail is a self-guided neighbourhood walking trail, complete with a hydration pit stop at five local breweries, that celebrates the revival of Collingwood’s long lost brewing industry! The FREE Collingwood Beer Trail map is available at Bodriggy, Fixation, Molly Rose, Stomping Ground and The Mill, or by download, but purchase a Good Beer Week Trail Pass Pack and in addition to 3 tasting glasses at each brewery you will land a collectible Good Beer Week Teku glass, Trail tote bag and stubby holder!

Packs can be purchased prior to Good Beer Week but will only be available for pick up from the brewery you book your Pass Pack with (and start the Trail at) between May 14th and May 23rd, 2021.

Purchase your pass directly from any of the following breweries.

Lace up your boots and hit the cobblestones. Collingwood and its surrounds have always played an integral part in Australia’s brewing history and these micro-breweries have returned the area to its heyday.

Drag the map, and zoom with your scroll wheel (or pinch if you're on a phone). 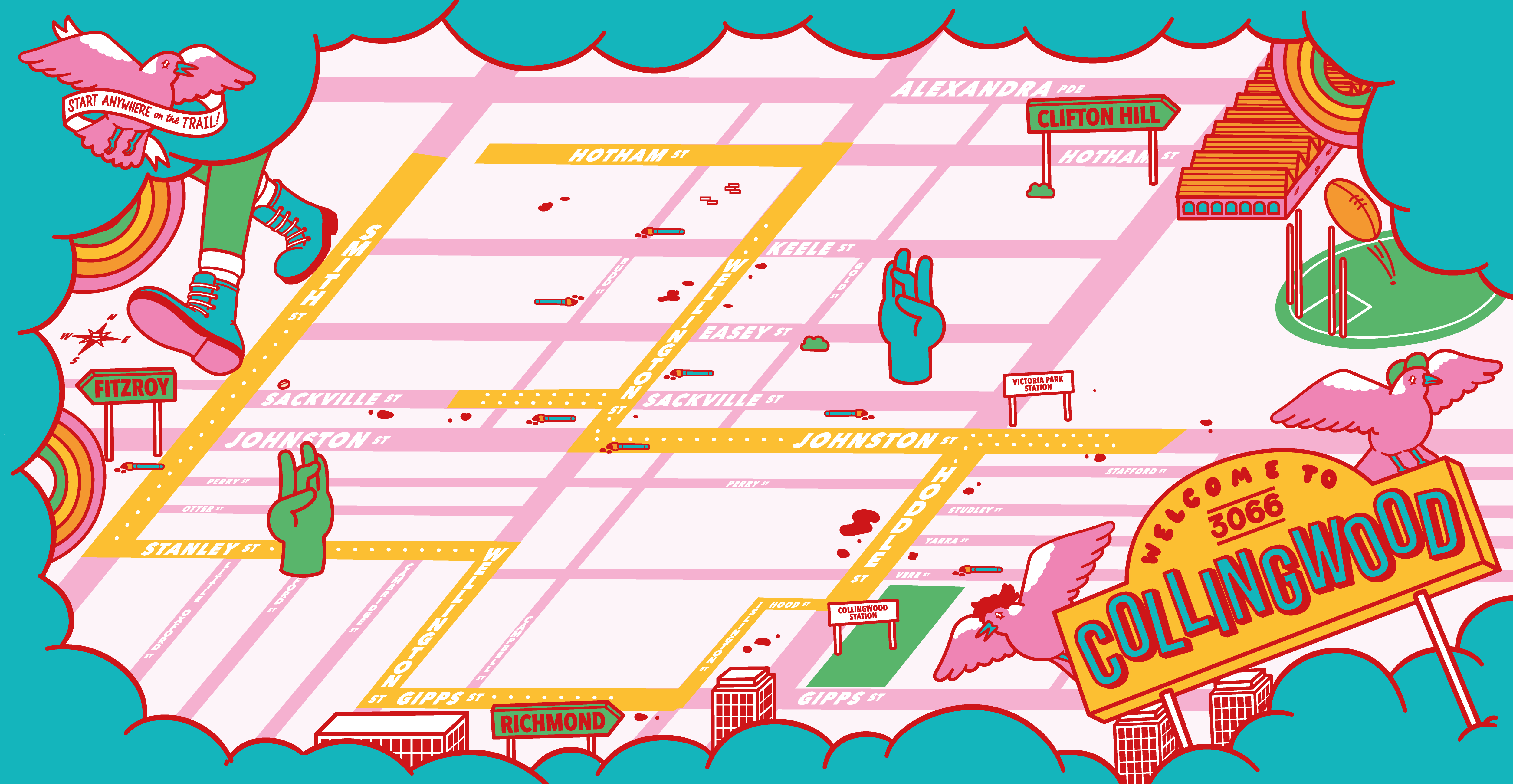 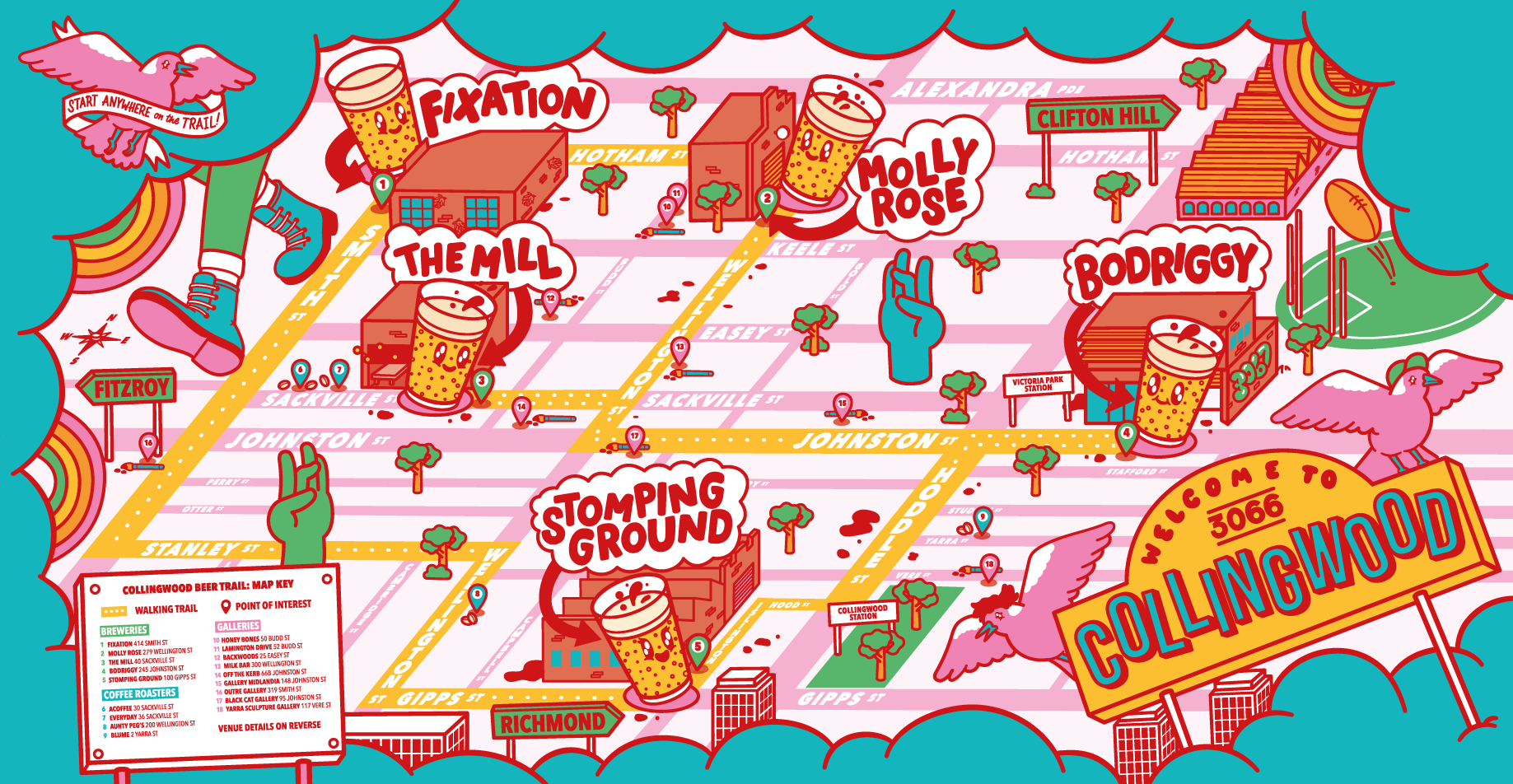 Born out of a fanatical obession with India Pale Ales (they solely brew IPAs), their flagship Fixation IPA first graced glasses in 2015. In 2018 they opened their brewery, tasting room & innovation space, the incubator. The incubator is where they dream up their hopiest ideas and pour them direct from their tanks. A hophead’s paradise! Fresh new beers drop every week with delicious food pre-pared by their neighbours, Red Sparrow Pizza.

The Mill Brewery resides in what was once an old mechanics workshop, just 100m off Smith St. With a huge outdoor beer garden it has a relaxed vibe, with brewhouse and tanks on show. Experimenting over 9 taps with all types of ales and lagers, guest beers, and paired with delicious handmade pizzas, they love to share the fun of brewing with friends!

Stomping Ground is a neighbourhood Brewery & Beer Hall bringing people together over a great beer. Under the sawtooth roof of the massive converted warehouse, the crew at Stompo brew great beers that suits all tastes, from laid-back easy drinkers to adventurous spirits. Bask in the sunny garden, grab a meal from the open kitchen or let the kids run wild in the cubby house while enjoying 30 taps worth of tasty brews directly from the source!

Once-upon-a-time an Auto LP Gas conversion garage, venture beyond the faded yellow brich façade of 245 Johnston St, Abbotsford, and you'll find a fun-palace columinating in a brewery, brewpub cocktail bar and more. Dedicated to local culture, arts & music, the space, & froffs brewed within it, are forever exploring the best experiences for drinking beer and the people the brew for.

Molly Rose is a small brewery which embraces the way that great beer can bring all sorts of people together to enjoy good times. Monday-Wednesday founder/brewer Nic Sandery and the team brew sour, hoppy and farmhouse beer in their small venue on Wellington Street. Thursday through Sunday they swing open the doors to serve their beers alongside great wines, cocktails and food to welcome everyone who visits.